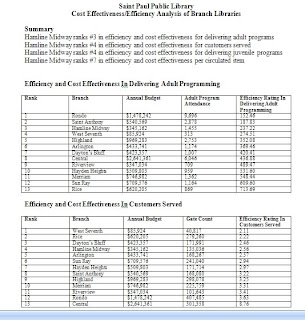 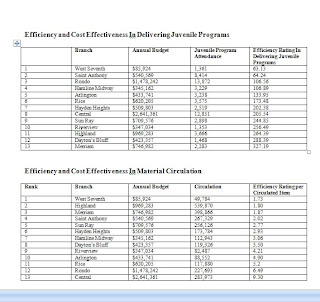 Ten Suggestions to Save and Generate $1.5 Million

Without Closing The Hamline Midway Library

Like Como Zoo, the City of Saint Paul should provide large and visible places for individuals to donate to the library at every branch in the library system. There should also be smaller, temporary donation bins for use at each library branch before and after adult and children’s events. Presenters and/or the head librarian should refer to the temporary bins before and after the free programs.

Library customers visited the library 2.7 million times last year, which means that a donation of just ten cents per visit or $1 for ten would generate enough money to staff the Hamline Midway library ($270,000). If the 108,504 people who attended a library program last year also donated an average of $3 each, SPPL would generate an additional $325,512.00 in revenue. SPPL currently has no systemic method of requesting voluntary donations in this manner.

2. Use Four Work-Study Students and a Half-Time Librarian II to Staff the

Partner with local colleges and universities to employ four work-study students who are seeking degrees in early education or library sciences to staff the Hamline Midway Library. Reduce the current Librarian II position to half-time. This plan does not eliminate any current union employees, because there were 4 FTEs added in the 2009 Adopted Budget, which were not filled, in addition to one existing position that has been left vacant. The approximate savings from utilizing work-study students would be between $200,000.00 and $250,000.00.

Eliminating the cap on the amount of a fine that can accrue against an individual would result in an estimated $50,000.00. This was an alternative considered by the library director, but was not incorporated into the final budget proposal.

Decreasing mailed materials for a savings on postage would result in an estimated cost savings of $20,000. This was a savings considered by the library director, but was not included in the final recommended plan for budget reductions.

Similar to Parks and Rec, SPPL could charge a minimal fee to reserve meeting rooms. 3,472 non-library meeting room events took place in 2008. If every library that does not charge a fee, (or does not charge a fee to non-profit groups) instituted a $10 meeting-room fee, SPPL would generate approximately $30,000 in additional revenue. A $15 meeting-room fee would result in $50,000 in additional revenue. A limited number of libraries already charge a fee to rent rooms, so this would simply expand an existing policy to the entire library system.

There were 20,569 requests from library customers for books from other libraries. Charging seventy-five cents for this service would result in an additional $15,426.00.

The Save the Hamline Midway Library Facebook group has grown to 235, keep it going...

It's really important that we all show up at the meeting with the mayor and library director at Hamline-Midway Library, 6-8 pm on Tuesday, March 10. But let's have fun while we're at it.

Please come to a community celebration in front of the library starting at 5:30. We'll have hot cider and treats and family-friendly local music starting around 5:45.

Wear red, bring signs and balloons, and be sure to invite friends.

Baked goodies to share are welcome, too!
Posted by Supporters at 11:10 AM No comments:

With a small staff, and small square footage, the H-M Library compares favorably with other branches in terms of services provided:

The Hamline Midway Library also ranks 1st in the number of patrons who walk to the library!

2. Most of the savings incurred in closing Hamline Midway would be related to FTE.

FTE stands for a "Full Time Employee," which is the bulk of the cost for running the Hamline Midway Library.

Our goal is to reduce overall library costs without closing the Hamline Midway Library.

Alternatives to consider include:

• Supplement FTE with volunteers or work-study students, both at HM Library and the other small branches;
• Reducing hours or days of operation across the library system;
• Raising private / community funds to cover materials costs (including donation bins, such as those at Como Zoo).

We are in the process of working with the Library Director to obtain more specific data in order to provide more specific (dollar amount) proposals.

In summary, closing Hamline-Midway Library would save a minimal amount in building maintenance ($12,932.00 / year) while having a disproportionate negative impact on our neighborhood's culture, livability, property values, and economy. Reduction of FTE costs can be accomplished more equitably than closing an entire facility in one neighborhood.
Posted by Supporters at 5:30 PM No comments:

Save Our Library Video

Posted by Supporters at 9:33 PM No comments:

Glen Fladeboe, who is working with the City of St. Paul and the
Coalition of Greater Minnesota Cities, called today about a
campaign being launched to publicize the impact of local government
aid cuts. The goal is to restore local government aid funding.

If local government aid is restored, our library is saved.


The campaign will hold a 15-minute press conference this Friday, Feb.
27, 11:30 am in Room 125 of the State Capitol Building. Glen asked
me to spread the word and encourage people to attend with their
children and signs about the library. The campaign's website is
www.ThankLGA.org.

Thanks in advance, and PLEASE spread the word. I know this is short notice, but any presence there would be helpful--and don't forget to bring signs and WEAR RED.
Posted by Supporters at 7:03 PM No comments:

Supporters
This is our community website to help us organize to save the Hamline Midway Library.